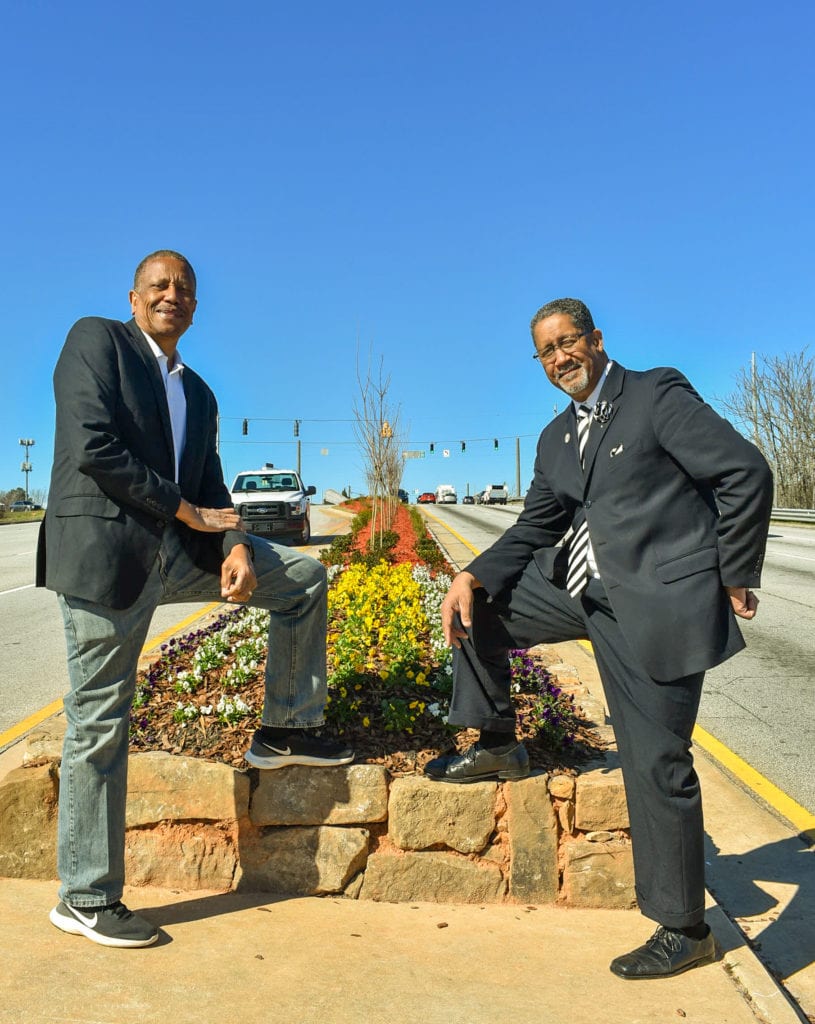 Left to right: Stonecrest Councilmember Jimmy Clanton, District 1, and Stonecrest Mayor Jason Lary strike a pose where new landscaping has been installed on Turner Hill Road near the Mall at Stonecrest.

Stonecrest residents can now see the beginning of the city’s beautification efforts on Tuner Hill Road and Stonecrest Parkway.  As a result of a collaborative effort between the city of Stonecrest and the East Metro Community Improvement District (CID), the median landscaping on Turner Hill now has hundreds of yellow pansies, decorative shrubs and several crape myrtle trees.

Similar streetscapes have begun on Mall Parkway.  Ongoing maintenance for these medians will be paid for with funds from the East Metro CID and aided by the city’s new right-of-way maintenance program. Community Improvement Districts are an economic development tool widely used for services such as road construction and maintenance, parks and recreational area upgrades, public safety, and to supplement nearly any infrastructure services that the city or county provides within the boundaries of the district.  CIDs are funded by the business owners within the district who, by majority consent, impose an additional property tax upon themselves to pay for improvements.

“This beautification effort didn’t cost the Stonecrest residents a dime,” Mayor Jason Lary said. “This streetscaping is an important element of our economic development plan because a clean, beautiful place is a place that people want to come to work and conduct business.”

Councilman Jimmy Clanton serves as chairman of the Stonecrest CID Oversight Committee, which works with the East Metro CID to negotiate beautification projects within the city, praised the Stonecrest Parkway and Turner Hill Road projects.

“This great collaboration will continue to produce ongoing efforts to improve the city until Stonecrest forms its own CID,” Clanton said.