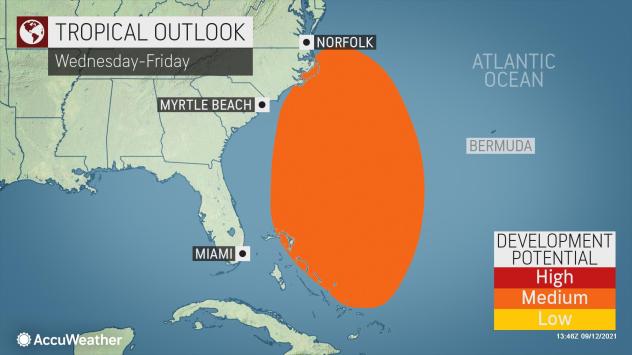 AccuWeather meteorologists are keeping a close eye for the possibility of tropical development along the southern Atlantic coast of the United States during the middle to late week that could stir up dangerous surf and trigger tropical downpours along the Carolina coast.

While Tropical Storm Nicholas takes aim at coastal Texas this week, a feature just off the Southeast coast could be the next potential candidate for tropical development to impact the United States.

This comes less than a week after Tropical Storm Mindy quickly organized and ramped up before making landfall in the Florida Panhandle as a tropical storm last Wednesday. Mindy was the seventh landfalling tropical system to hit the U.S. so far during the 2021 Atlantic hurricane season.

Now, just a week later, another tropical entity could lead to heavy rain for other portions of the same area that was impacted by Mindy. Areas such as the immediate coasts of the Carolinas may have localized tropical downpours as early as Friday, as the system could track very close to the U.S.

“Development may occur off of the Southeast coast during the mid- to late-week period as the northern portion of a tropical wave currently near Puerto Rico interacts with an upper-level storm east of the Bahamas,” AccuWeather Senior Meteorologist Randy Adkins explained.

If given enough time and certain atmospheric conditions, mid- to upper-level storms can spin down to the lower part of the atmosphere and take on tropical characteristics, especially this time of year.

Adkins went on to say that conditions will be such that a tropical depression could develop as wind shear decreases in the area of potential development later in the week with the feature, as of now, expected to remain off the East Coast.

Wind shear is the change in direction and speed of winds at increasing heights in the atmosphere. When strong wind shear is present, the cloud tops of a tropical system can be “chopped off,” resulting in the storm becoming lopsided and unlikely to intensify.

Georgia Power seeking contestants for “Light Up the Holidays” contest