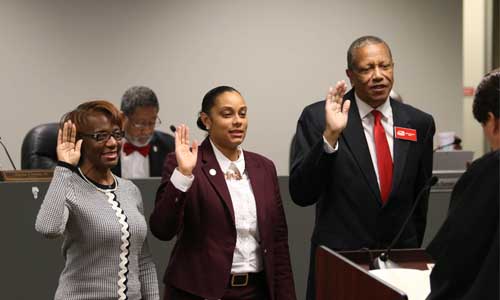 The councilmembers were originally elected in the city’s first elections and runoffs in March and April 2017. In accordance with the city charter, half of the council had to run again in November of 2017. The remaining councilmembers and mayor will have to run for office in 2019.

The council did not elect a new mayor pro tem. City Attorney Tom Currie advised that Councilmember Adoma would continue to hold the position until May 8, 2019, unless state legislators adopt a new city charter that would require elections to be held every January. Currie cited a City of Nashville, TN case law for his decision and that of outside counsel.

In other city business, the mayor and council voted 5 to 1 to adopt a new city charter. Councilmember Cobble cast the dissenting vote. The charter now goes to the state legislature for approval.

“The reason we have a new charter is to separate the executive branch from the legislative branch and their duties,” Mayor Jason Lary said. “By law, we have to take on additional departments such as public works. Also, the addition of a SPLOST budget drove us to adopt the new charter,” he added.

The new charter provides for the following:

Provides for any non-residential property owner’s membership into the Stonecrest CID.

Councilwoman Adoma said although she voted to approve the resolution, she wanted the record to reflect the following statement:

“As we prepare to vote on this resolution, respectfully, there are a few items I simply don’t agree with. However, most of the changes I do agree with. I believe it would be in the best interest of our city to operate more efficiently and effectually. Therefore, in the spirit of compromise, and moving the city forward, and working with our legislative delegation, I’m voting, reluctantly, in favor of this resolution.”