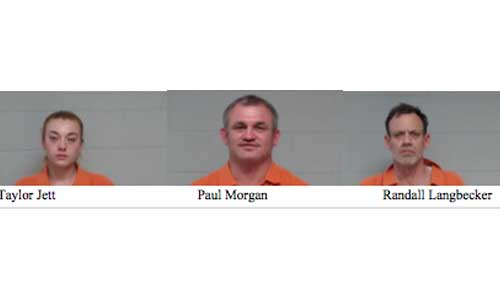 Three suspects, two of them convicted felons, have been arrested in  connection with a standoff that kept hostage negotiators on the scene for hours on May 2 at the Pawn Depot, 2605 Old Covington Highway, Conyers.

It was unclear why the arrests were not initially reported in an earlier news release concerning the incident, which began on Saturday, May 2, around 11:14 a.m. and lasted for several hours.  In that release, Sheriff’s spokesman Lee A. Thomas said the owner was taken in for questioning but was not arrested or charged. Thomas also stated that authorities did not find anyone inside the pawnshop who was being held against their will after responding to the scene.

Thomas said today that investigators executed a search warrant at the Pawn Depot during the standoff and seized several hundred guns, multiple types of illegal narcotics and a large sum of cash.