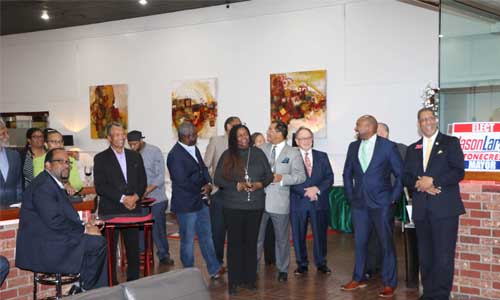 Stonecrest Mayor Jason Lary kicked off his re-election campaign on Dec. 20 with supporters attending a reception at the AEI Startup Factory in the city of Stonecrest.

Lary said even though the election isn’t until next year, he wanted to end 2018 on a high note and start 2019 strong.

Lary, who announced in September that he had prostate cancer, said he never missed a City Council meeting while undergoing medical treatment, which he completed this month.

“I thought that I was going to have to step back and take some time off, but I just powered my way through it,” said Lary. “I’m ready to move forward in 2019.”

Several supporters who attended the kickoff spoke of Lary’s drive and determination to lead the city.

Attorney Bernard Knight recalled meeting Lary when Lary was working to form the city. Knight said he was  impressed with Lary’s vision and the progress that the city has made in the last year and a half including getting the Stonecrest Development Authority up and running, the Planning Commission, Zoning and Appeals Board, a new comprehensive plan for the city and $40 million in SPLOST funding over the next six years.

“The vision that Jason had back then and that he still has  and is making happen is a vision of a city, which is nonpartisan, biracial and which is working to benefit everybody, increase the quality of life here and bring about responsible environmentally-friendly economic growth. “We need to have Mayor Lary continue in his leadership of this city.”

Larry Steele, a friend who said he has known Lary since they were teens, urged supporters to get behind the man he described as “the most tenacious person that I’ve ever met.” “When he sets his mind to do something, he will move heaven and earth and he will make that thing happen… He is not going to quit until the last stone is turned, until the last rock is lifted, until everything possible can be done,” Steele said.

Steel reminded supporters how hard Lary worked for the formation of the city, despite naysayers and opponents who said the city would never come to fruition. Lary led the effort for cityhood, pushing four years. Voters approved the referendum for incorporation in Nov. 2016 and elected Lary as the city’s first mayor in March 2017. Due to staggered terms for the City Council, Lary is up for re-election next year.

Lary’s pastor, the Rev. Edward Randolph, Jr. of Union Missionary Baptist Church in Lithonia, told supporters he was proud of Lary’s leadership as mayor and at church where Lary recently became an ordained deacon.

“Just to watch him grow… We’re just so proud of the things he is doing,” said Rev. Randolph. “We are certainly looking forward to some great things.”