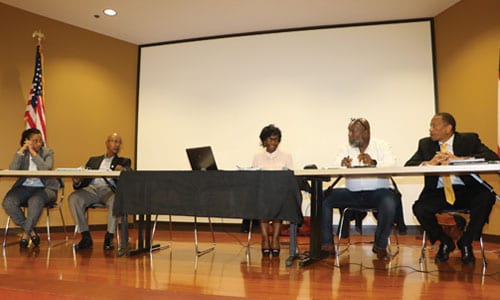 Stonecrest City Councilwoman Diane Adoma, in her capacity as mayor pro tem, ran the May 24 work session in Mayor Jason Lary’s absence. Lary was attending the RECON conference in Las Vegas with developer Vaughn Irons and representatives from Discover DeKalb Convention and Visitors Bureau, the Mall at Stonecrest and other agencies to recruit vendors for the Atlanta Sports City at Stonecrest project. Emory Healthcare and Urban Retail, which owns the Mall at Stonecrest, announced their partnerships with the project on May 17.

The Stonecrest City Council’s three-hour work session covered several items including continued discussion on capitol equipment needed for the council and mayor. The council discussed spending up to $50,000 to cover the cost of cell phones, cell phone contracts, laptops, a P.A. system, recording equipment, cameras, web site development and other items. City Attorney Thompson Kurrie, Jr. recommended the council prioritize what is needed with the city manager. The council, he said, still must authorize the expenditures by an official vote. That vote could be made at the June 5 council meeting to expedite purchasing some of the equipment.

The council announced it invited three newspapers to make presentations at the May 31 work session to be considered for the city’s legal organ.

The council also agreed to hold a special work session to discuss clarifications to the city charter, including responsibilities of the council and mayor. A date was not set for that meeting.

The council discussed revisions to the Governor’s Commission on Stonecrest’s report. Commission chair Joel Thibodeaux presented amendments concerning the mayor’s responsibilities during the council’s May 8 work session. Adoma said she published the report online after several residents requested it. Councilman Jimmy Clanton asked that the report be accepted by the council. Adoma, however, only recognized receipt of the report.

The council went into executive session to discuss negotiations for potential sites for City Hall. Three sites were recommended by the Governor’s Commission. T. Dallas Smith Corporation is handling negotiations for the City Hall space.