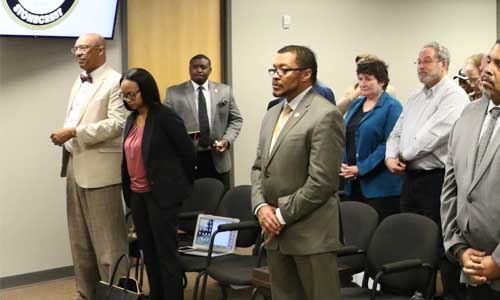 Attorney Dwight Thomas (far left) stands on the front row as the audience prepares for a prayer led by Pastor Lee May, former DeKalb

Stonecrest Mayor Jason Lary moved for an executive session on Monday night after the City Council heard public comments that included several people who spoke in opposition to the cell tower that recently went up in Stonecrest.

When On Common Ground News contacted the mayor after the council meeting to ask why Thomas was asked to join the executive session, Lary said by law, he couldn’t discuss the matter.

Thomas has earned a reputation as a zealous defense attorney. Before entering private practice in 1980, he worked briefly for the Fulton County Solicitor’s Office, served as an attorney for the U.S. Department of Health, Education and Welfare and later for the

U.S. Department of Education as an attorney for the Office of Civil Rights. Thomas also practiced law with Hank Johnson, who is now a Congressman.

The council met behind closed doors for over an hour. During that time, some of the councilmembers were spotted going back and forth from the auditorium to the closed door meeting.