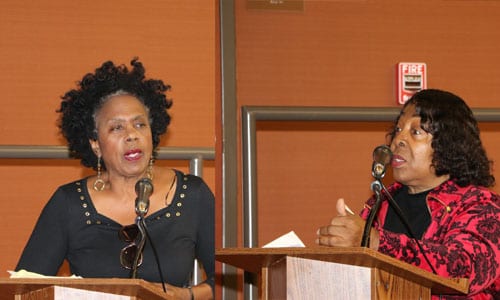 After hearing from 25 people during public comments at today’s City Council meeting, the Stonecrest City Council deferred a vote on proposed changes to the city’s charter. The council plans to vote on the changes on Dec. 4.

Mayor Jason Lary is holding a public forum on Nov. 27, 6 p.m., at the Stonecrest Library ahead of the council’s vote. Lary said he plans to further explain the proposed changes.

If the resolution is adopted, it must still be approved by the DeKalb County legislators.

Faye Coffield (pictured at left above, who opposed the proposal ) and Dr. Barbara Lee (at right who supported the proposal) were among those who spoke at today’s meeting. The edited video below captures some of the speakers. Each person was allowed to speak up to three minutes. Check back for a longer version of the video.