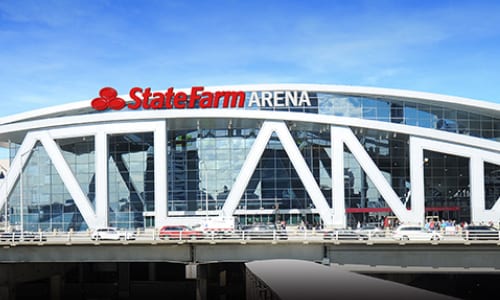 What’s in a name? A lot, if you’re willing to pay for it.

Philips Arena, home of the Atlanta Hawks, will now be known as State Farm Arena.

In a recent announcement, the insurance company agreed to a 20-year naming rights deal with the Hawks for $175 million.

“This decision symbolizes our pledge to making a difference in communities, building our brand locally and nationally, and ultimately growing State Farm,” said State Farm Chairman and Chief Executive Officer Michael Tipsord in a release. “The Atlanta Hawks Basketball Club is well known for giving back in this community. Along with our Neighborhood of Good initiative, we’ll have new opportunities to invest in the local community.”

State Farm Arena will be ready for action upon completion of a $192.5 million-dollar renovation. According to Hawks press releases, the venue overhaul will feature the third-largest center-hung scoreboard in the NBA and most immersive video experience, new sightlines with 360-degree concourses and new seating and first-of-its-kind in-venue entertainment options with Topgolf Swing Suites, the company’s first permanent amenity in a major sports arena, Killer Mike’s SWAG Shop (a 4-chair barbershop overlooking the court) and the signature Hawks Bar, the NBA’s first courtside bar.  State Farm Arena will also be the first NBA venue to offer fan-friendly food pricing with 12 popular food and beverage items priced at $5 or less.

Philips Arena opened in 1999, replacing the Omni Coliseum, at a cost of $213 million.

Fans will get their first opportunity to enter the new State Farm Arena on Saturday, Oct. 20, with the “Welcome to the Neighborhood” Open House Party, a free, public event inviting fans to experience the new venue.