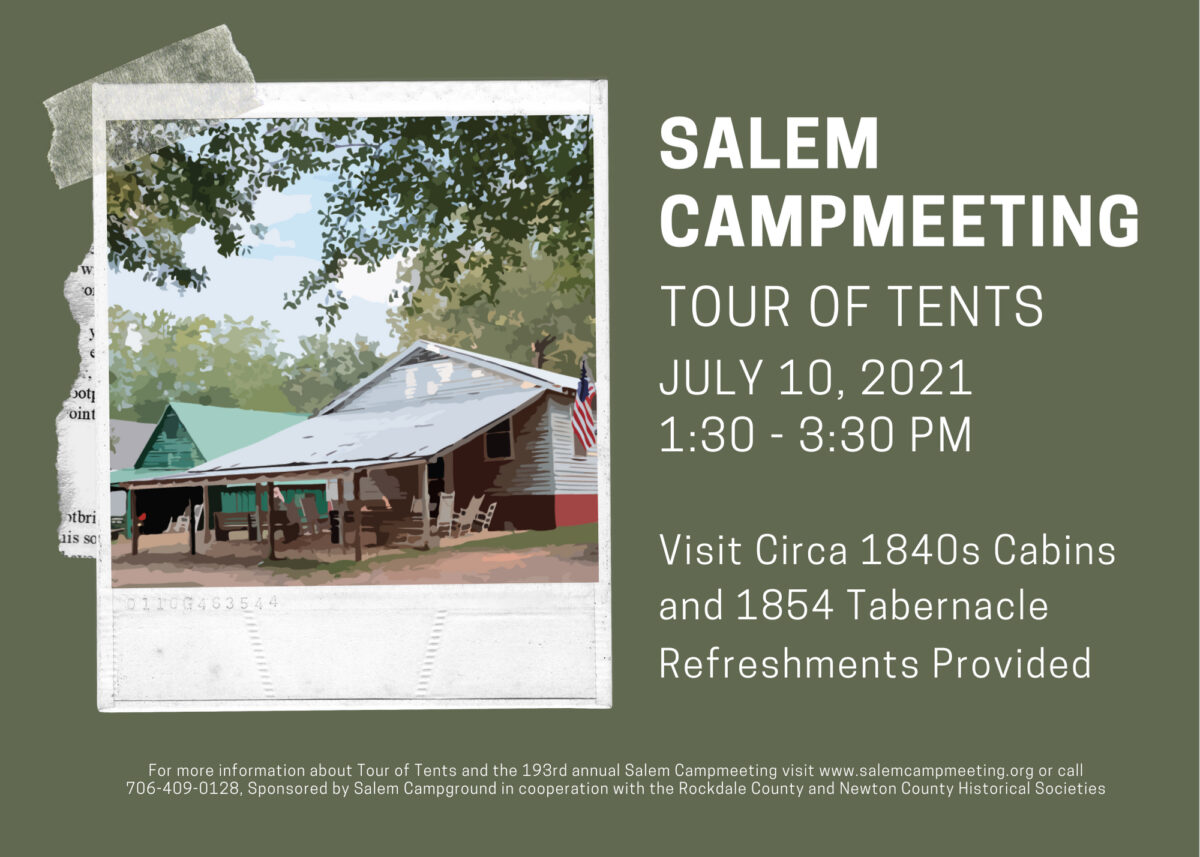 COVINGTON, GA—To celebrate the opening weekend of Salem Campmeeting and invite the community to the historic campground, long-time “tenters” are hosting a Tour of Tents  on Saturday, July 10, 1:30 to 3:30 p.m., 3940 Salem Road, Covington.

The tour, which is free and open to the public, is sponsored in cooperation with the Rockdale and Newton County Historical Societies. The campground is on the National Register of Historic Places, one of 13 such locations in Newton County.

Tents is an unusual term for the rustic cabins that encircle the campground, but the name harkens back to the 1800s, in the early days of the campmeeting, when families would arrive by wagon and erect temporary tents to serve as their home during the week-long community gathering and revival.

Over time, families built permanent structures, usually with floors covered in wood shavings or hay, and though the dwellings no longer resembled what we think of today as tents, the name has stuck. This year marks the 193rd campmeeting.

“This is not an ordinary tour of homes,” said Joe Cook, a Salem board member helping to organize the event. “It’s a window into the past that has played such a significant role in the religious and cultural heritage of Rockdale and Newton counties.”

The campmeeting tradition, a distinctly American contribution to the history of Protestantism, began in the early 1800s, providing farm families a time to gather for fellowship, worship and the chance of salvation during the “laying by time” of late summer when crops were established but not yet ready for harvest.

Today’s Salem features a full week of daily worship services, Bible study classes and special activities for youths and adults. The campmeeting begins Friday, July 9, with an opening service at 7:30 p.m. Services continue daily at 11 a.m. and 7:30 p.m. through July 16. Rooms and meals are available at the Salem Hotel.

Tour of Tents attendees are encouraged to walk the campground and visit tents included on the tour as well as the tabernacle that dates to 1854. Refreshments will be provided at many tents. Each comes with its own unique story.

The oldest on the grounds, the Ramsey-Cunningham tent, dates to the 1840s and appears very much as it did in the 1800s. Though updated with electric lights and indoor plumbing, it still sports wood shaving floors.

Two doors down from the Ramsey-Cunningham tent is the Atkinson tent, occupied by the family of Betty Ramsey Robertson Kincaid since the 1980s. This tent dates to the late 1860s and was built by Welcome Almond whose descendants occupied the tent for its first 120 years.

The John and Claire Cowan tent was built in the 1930s by the Salvation Army and housed the Salvation Army band that played at services and provided administrative support for the annual meetings during the 1930s. The Cowan family began using the tent in the 1950s and 12 to 16 of their descendants continue to crowd into the 8-bedroom dwelling each year.

Other “tents” were hand built by the owners. In the 1940s, Bob and Nell Elliott built their cabin in sections at their Conyers home and then transported the sections to the campground to assemble them.

Similarly, the Aaron and Susie Kemp tent was constructed in the 1950s using leftover building materials from Kemp’s cabinet business. Notably, the shower is tiled in multiple colors using the remains from other jobs.

“Each tent has its unique character,” said Cook, “They are the sites of much laughter, tears and fellowship over the 193 years of the encampment. They are rustic but for the tenters that come back each year, they are hallowed ground.”