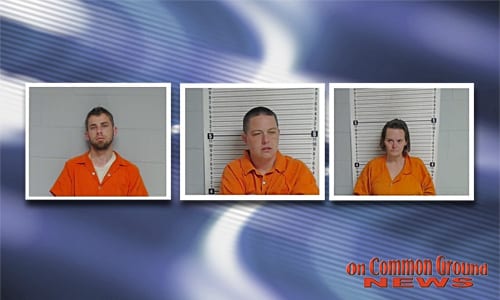 A Conyers husband is one of three men indicted in connection with an alleged drug trafficking scheme that claimed his newlywed wife’s life. Michael Dale Lavigne, 33, was indicted last Thursday by a DeKalb County Grand Jury on charges of Felony Murder (two counts), Conspiracy to Violate the Georgia Controlled Substances Act, Possession of a Firearm by a Convicted Felon, and Possession of a Firearm During the Commission of a Felony, in connection with the death of his wife, Alisha Stephens, age 35.
Carlos Rodriquez, 19, and Juan Carlos Ortiz, 29,  alleged members of the Latin Kings criminal street gang, were indicted on charges of Malice Murder, Felony Murder, Armed Robbery, Aggravated Assault and conspiracy to Violate the Georgia Controlled Substances Act for their roles in the crime. Rodriguez was also charged with weapons offenses.
The charges against the trio stem from a deadly shooting on Oct. 22 in the parking lot of a Popeyes restaurant in the 3000 block of Panola Road in Lithonia. According to the preliminary investigation, Lavigne and his wife met Rodriguez at the location for the purpose of purchasing methamphetamine for later street sale and distribution. After money was exchanged, an argument ensued between the parties and escalated into a gunfight. Alisha Stephens was fatally struck during the exchange. Defendants Lavigne and Rodriquez were also wounded.
Further investigation revealed that the drug deal was allegedly orchestrated by Defendant Ortiz, a reputed Latin Kings gang boss, as part of an elaborate operation from his cell at Hancock State Prison in Sparta where he is currently serving time on a 2008 armed robbery conviction.
Following his indictment, a Grand Jury warrant was issued for Defendant Lavigne’s arrest. Rodriquez was arrested shortly after the crime.
The investigation and prosecution is being led by members of the District Attorney’s Major Case Unit. This marks the second time the Unit has charged a high-ranking gang member with directing criminal activity from prison. Sex, Money, Murder leader Kenneth “K.G.” Jackson was sentenced to life without parole last year after being convicted of ordering a hit from prison that resulted in the death of a baby.
A trial date has not yet been set for Lavigne, Ortiz, and Rodriguez.
Post Views: 833
Share. Facebook Twitter Pinterest LinkedIn Tumblr Email
On Common Ground News