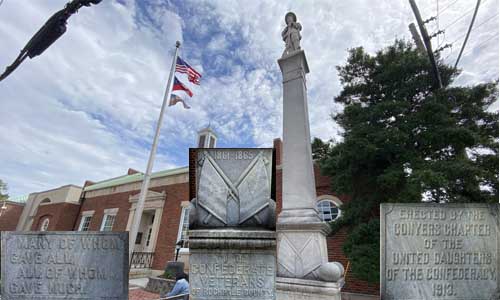 CONYERS–Rockdale County residents are calling for the removal of a Confederate monument that has stood for more than 100 years in front of the Rockdale Courthouse on Main Street.

They are speaking out at a time when the nation is witnessing the widespread removal of Confederate iconography and protests are mounting against bigotry, white supremacy and racial injustice. 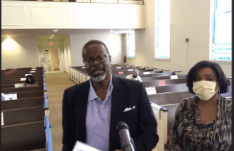 For Rockdale, the sweeping movement hit close to home last week. In neighboring DeKalb County, a Confederate monument erected in 1908, was removed on June 18 after years of pressure and a recent court order by Superior Court Judge Clarence Seeliger.

On Tuesday (June 23), Gary Washington, a criminal defense attorney, and his wife, Evetta, petitioned the Rockdale County Board of Commissioners (BOC) to remove the Confederate monument erected outside of the county’s courthouse since 1913.

Washington said the statue  “with the two engraved Rebel flags and the flags symbolizing white supremacy—is repugnant on the principle of equal justice under the law.” He said such monuments have polarized our nation far too long and there is now a national outcry for change, an urgent call for a new chapter in history.

“The protests that we have seen all across America in the past few weeks highlight the notion that we are very deeply divided, It’s just that there’s been no declaration of war yet, Washington said. “Confederate monuments have been defended as part of our history, our heritage and I agree, that every American shares that history–whether you’re the descendant of a slave or a slave owner.”

Still, Washington said, the Confederate monument, which glorifies the Civil War fought from 1861-1865 over the institution of slavery, must be removed from the courthouse. The courthouse, he said, symbolizes equal justice for all.

Removal of the monument, however, may not be as simple as petitioning Rockdale’s BOC. Board Chairman Oz Nesbitt told Washington that while today’s climate “speaks profoundly to the fact that we’ve got to reconsider some things,” he expressed concern about jumping on the bandwagon.

“The spirit of this board supports what we’ve been hearing from you and your wife this morning,” said Nesbitt. “We will follow the letter of the law to do things in the way that they should be done.”

Nesbitt said he appreciated the Washington’s coming before the board, adding that he had received a “good number” of e-mails, text messages and phone calls from black and white constituents also have expressed a desire to remove  the monument.

Nesbitt said Rockdale will mark its 150-year anniversary this October and county officials are looking at incorporating the monument into the celebration.

“…The removal of a lot of these monuments have been such a negative thing in the local news. As we move in that direction, we want to incorporate it and make it a part of the history and the transition of time,” said Newsbitt, who was re-elected to office in the June 9 election. “…We want to do it in a different manner so that it doesn’t seem so negative.”

Washington urged the BOC to consider adopting a resolution in support of the removal of the Confederate monument.

Rockdale Commissioner Sherri Washington, who is no relation to Gary Washington, said she was interested in continuing talks with the couple and invited them to sit down with her and others.

Gary Washington’s appearance before the board was the second time in one week that he has spoken with elected officials about the removal of the monument. He went before the Conyers City Council on June 17. Mayor Vince Evans told him any decision concerning the monument rests with Rockdale County government since the monument is on county property. Evans said he would, however, look at having discussions with the council and the community in the near future.

Longtime City Councilman Cleveland Stroud agreed with Washington that the monument should be removed.

“It’s bothered me for many, many years. I can’t see anything positive about the Civil War, except that my people were freed, said Stroud who for years had been the lone black on the council until the election in 2019 of the city’s first two female blacks, Connie Alsobrooks and Valyncia Smith. “It’s a part of our history, but we should not glorify it. ”