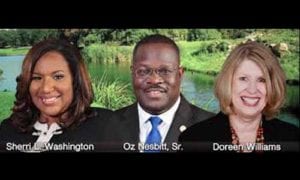 ROCKDALE COUNTY, GA –The Rockdale County Board of Commissioners approved a resolution on Jan. 25 to create a new Public Facilities Authority to help facilitate its plan for future growth. The resolution was approved during a virtual meeting, which was held at 10 a.m.

The authority will provide the county, Rockdale County School District and the City of Conyers with an additional method of financing government projects. Bonds issued by the authority will have the lowest possible interest rates and cost of issuance, officials said. The authority can raise capital to be used in the acquisition, design, and construction of public facilities.

The county is limited by the Georgia Constitution in its ability to contractually commit expenditures of public funds beyond one year. A Public Facilities Authority can commit expenditures up to 40 years. This arrangement also keeps ownership of these facilities within public entities, officials said. The Board of Commissioners will have oversight of the Authority.

Creating a Public Facilities Authority requires an act of the Georgia legislature. The intent is to have the legislation approved during the 2022 Georgia General Assembly, which is currently in session.