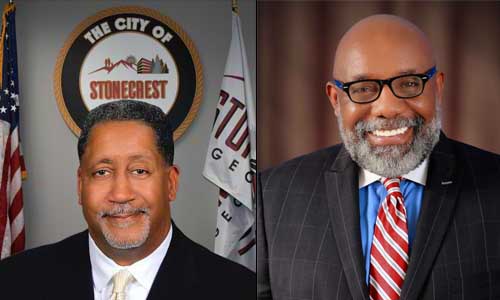 STONECREST—Residents are planning to stage a drive-thru protest to stop the construction of a Metro Green, LLC concrete recycling plant, which is now underway in the city of Stonecrest.

The protest will be held in the parking lot of Stonecrest City Hall on Aug. 10, 6:30 p.m., said Kamla Gonzales, one of the organizers.

Gonzales and other residents say the plant will bring pollution, continuous truck traffic, noise and lower their property values and they want the city to shut down construction immediately.

“The citizens of Stonecrest are under the impression that the mayor has allowed Stonecrest to become a dumping ground,” said Gonzales. “Instead of using this opportunity to address our concerns and ensure us this wasn’t the case, Mayor Lary decided to insult us by saying “You’ve got to be a complete ass to think that.”

Mayor Jason Lary said he was defending himself against vicious untrue accusations leveled at him at the July 27 City Council meeting.

“It’s frustrating when people are saying that I’m an environmental racist and the intent from the beginning was to create Stonecrest as a dumping ground for toxic industrial companies and to suppress the black vote!! I’m black just like them,” said Lary. “I worked four years to build this city from scratch and an additional three more years governing it. I’ve made personal, family and career ending sacrifices that no one else would have ever considered to serve our community. Stonecrest is my life’s work. I stand by what I said: If you insinuate or think that I created the City of Stonecrest to do us harm, that’s the dumbest thing ever.”.

Lary said the city had issued a stop-work order on the project on July 1 on the advice of staff and City Attorney Winston Denmark. He said he lifted the order on July 14 on the advice of Denmark, who expressed concerns about possible legal action from Metro Green.

The mayor said that a decision on the stop-work order is on the agenda for the Special-Called meeting this evening (Aug. 3) at 6 p.m. Councilmember Rob Turner said he called for the meeting and is expecting the council to vote on issuing the stop-work order immediately.

“Citizens and four council members are demanding a stop-work order and again, I will follow the advice of our city attorney,” Lary said. “As mayor, I am going to do what is in the best interest for the entire city based on the legal opinion of our city attorney. Because whatever decision we make, it will have a long-lasting effect on the city,” Lary said.  “I have to follow the law.”

Lary said he sympathize with the concerns of residents and he is doing his best to make sure that the city serves the needs of the people.

“We’re dealing with patchwork zoning in our new city. When the city was first formed, the re-zoning was already in place that allowed developers to build homes in the industrial park. Now, people who have built their homes are upset because industry is coming on the land that was still zoned for industrial use,” Lary said.

Meanwhile, the city has launched an investigation into the permitting of the Metro Green project. The process began in 2018 under then-Community Planning Director Nicole Dozier and then-City Manager Michael Harris. The city manager wrote letters approving the project. Since the 50-acre tract was already zoned for industrial use, the matter never came before the City Council for a vote and moved through the permitting process, which included advertised public hearings for the project, staff members said.

Last month, however, some council members, including Rob Turner, said that they and residents were not properly notified of the proposed plant. Several residents say they found out a recycling plant for construction debris was going up when the land was cleared earlier this year.

“I don’t know how members of the council can say they didn’t know about it, even if the matter did not come before the City Council as a whole,” said Mayor Lary. “When Councilman Rob Turner and I met with Metro Green last year, they presented their plans for alternative entry into the facility. They said they would enter off of Snapfinger instead of Miller Road to avoid bringing so much traffic on Miller Road. The project is in Councilman Turner’s district.”

Turner said he did in fact meet with the mayor, staff members and Metro Green consultants last year, but he believed the project was already approved.

“It was a courtesy meeting to let me know what was going on because it was in my district. I didn’t have any input or anything like that,” Turner said.

Turner, along with Councilman Jimmy Clanton, the law firm of Fincher Denmark, LLC and City Planning Director Chris Wheeler are conducting the probe. They are trying to determine, among several things, why the state Environmental Protection Division (EPD) issued a solid waste permit to Metro Green last year, despite DeKalb County’s denial for approval. The city of Stonecrest has an intergovernmental agreement with DeKalb County to manage solid waste within the city.

DeKalb Sanitation Director Tracy Hutchinson stated in emails to EPD officials and Metro Green that the recycling plant’s plans were not consistent with the county’s solid waste management plan. However, a Metro Green consultant said during a town hall meeting last month that the permit was approved because Stonecrest had jurisdiction over the site since it is within city limits.The company maintains that it has complied with its state permit, state law and local ordinances.

Elected officials at the state and county level also have weighed in on the matter at virtual town hall meetings they have held.  State Rep. Doreen Carter and State Sen. Emanuel Jones, whose districts include the City of Stonecrest, along with DeKalb County Commissioner Mereda Davis Johnson, who lives in Stonecrest, are looking into the situation.

Commissioner Mereda Davis Johnson and Sen. Jones have sent letters to the EPD, urging the state to revoke the permit.