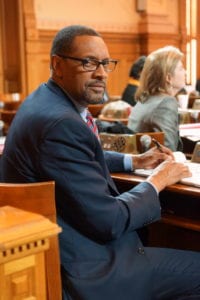 Vernon Jones was among the newly-elected state legislators who attended orientation on Nov. 15 at the state capitol in preparation for the 2017 General Assembly.

Although Jones, a Democrat, was elected on Nov. 8 over a Republican candidate to represent House District 91, which includes parts of DeKalb and Rockdale counties, he is not a brand new state legislator. Before serving two terms as DeKalb’s CEO from 2001 to 2008, Jones served as a state lawmaker from 1993 to 2000.

“I’m excited to be back. I have the experience and I understand how to effect change. I’m looking forward to working with the governor, the Speaker of the House and across party lines,” said Jones. “My job is to represent District 91 and create bi-partisan support for improvements in DeKalb and Rockdale counties. Improving the transportation gridlock is going to be my No. 1 concern.”