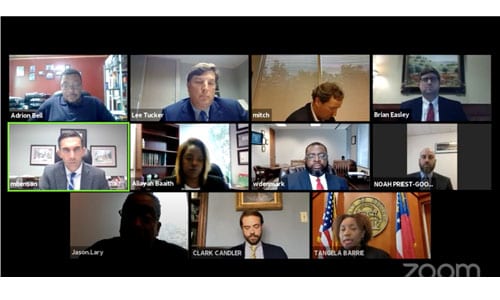 DeKalb County Superior Court Judge Tangela Barrie did not issue a ruling on Aug. 26 in the City of Stonecrest’s motion for a temporary restraining order against Metro Green Recycling, Inc.

Barrie said during the hearing that she wanted to be clear on what rights are being violated and specifically how the public’s health would be at risk as a result of the construction debris recycling plant Metro Green is building in the city of Stonecrest.

“I would be very concerned about issuing the TRO because I haven’t heard about the harm caused by Metro Green. I think there’s this general concept of harm when we’re dealing with anything environmental…”

City Attorney Denmark argued that “From our perspective, we think that whenever there is noncompliance with environmental laws designed to protect the public, that noncompliance in and of itself represents a public health emergency.”

Attorney Benson argued on behalf of Metro Green that the case should be dismissed on the grounds that the the city has failed to exhaust all of its administrative remedies. Benson cited a ruling in a Georgia Supreme Court case, which  found that a party aggrieved by a state agency’s decision must exhaust all available administrative remedies before seeking any judicial ruling.

The court hearing followed two days of protests this week by residents who have been fighting to stop the Metro Green project since May. Residents say the plant, which is under construction at 2450 Miller Road, threatens to harm their health and lower property values.

The virtual hearing, which was made available to the public via Zoom, can be viewed below.