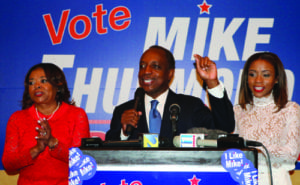 Thurmond will now face Republican Jack Lovelace in the November general election. Lovelace, the lone Republican running for the CEO seat, received 7,558 votes in the primary. The winner of the CEO race will oversee a $1.3 billion annual budget and more than 6,000 county employees.