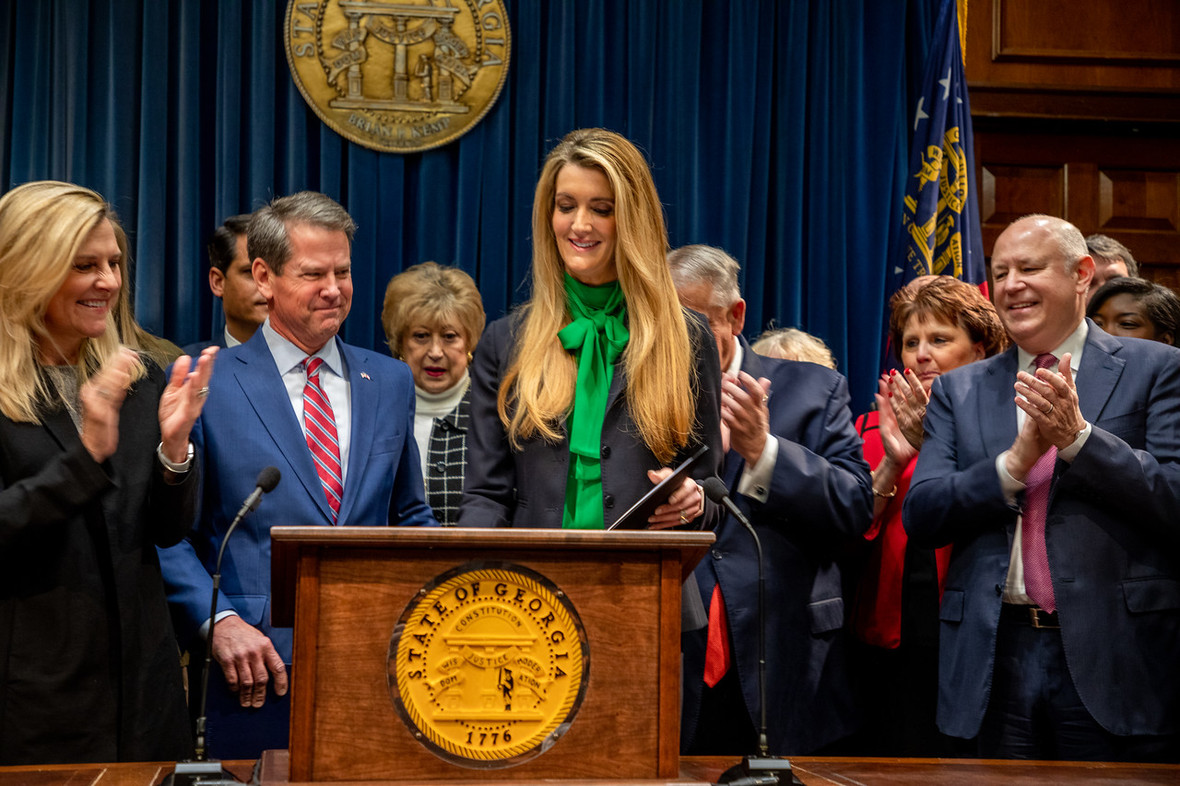 “From the farm to the New York Stock Exchange, Kelly Loeffler has lived the American Dream. I’m confident that she will work every single day to keep that same dream alive for our children, grandchildren, and generations to come. Kelly Loeffler will stand with the President, Senator Perdue, and their allies in the U.S. House and Senate,” said Governor Kemp.“I’m excited to appoint Georgia’s first female Senator in nearly 100 years – but, more importantly, I’m excited to appoint a life-long Republican who shares our conservative values and vision for a safer, stronger Georgia.

“Kelly is a patriot who believes in the greatness of America. She is willing to serve for freedom’s sake. She is a real conservative who will defend life against the radical left’s abortion-on-demand agenda, protect the Second Amendment, champion pro-growth policies, support our President, and put hardworking Georgians first.

“Senator Loeffler will fight to strengthen our immigration laws and finish the Border Wall so we can stop Mexican drug cartels from flooding our streets – here in Georgia – with drugs, weapons, violence, and fear. She will work to end this impeachment circus in Washington, D.C. and get Congress back to work for the American people.

“We have seen firsthand the impact that political outsiders like Donald Trump and David Perdue have in Washington, D.C. It is time to send them reinforcements so we can Keep America Great.”

“Over the last twenty-five years, I’ve been building businesses, taking risks, and creating jobs. I haven’t spent my life trying to get to Washington, but there are a few things folks are going to find out about me: I’m pro-Second Amendment, pro-military, pro-Wall, and pro-Trump. I’m a life-long conservative, and I make no apologies for my conservative values,” said Kelly Loeffler.“I’m strongly pro-life and believe that every life is a blessing. When it comes to protecting the innocent, I don’t look to government for the answers. I look to God.

“With all of the important work to be done in D.C. and here in Georgia, I’m disgusted by the impeachment circus and strongly oppose it. It’s a sideshow and partisan distraction. Democrats need to quit playing politics. We’re facing the fight of our generation – and that’s why I’m here. As an outsider, I know that I’ll have to prove it. I’ll work hard every day to earn Georgians’ confidence and support with my votes, priorities, and actions.”

“I congratulate Kelly Loeffler on her historic appointment to the United States Senate. Kelly’s business experience and acumen will be an asset to Georgia and the Senate. The same tireless work ethic that has helped her succeed in business will also help her succeed in serving Georgians and our nation. It has been the honor of a lifetime for me to serve this great state in the U.S. Senate, and my staff and I will work closely with Kelly to ensure a smooth transition.”

Following are some of the comments made by Georgia’s leaders:

“My number one goal is to continue the best economic turnaround in U.S. history and focus on the needs of the people of Georgia. The only way to ensure that happens is to advance President Trump’s agenda in the U.S. Senate. While Senator Isakson leaves behind big shoes to fill, I look forward to working with Kelly Loeffler, my new partner in the U.S. Senate, to continue that positive change for Georgia and our country.”

“Kelly Loeffler is cut from the same cloth as me, Senator Perdue, and President Trump: A successful businesswoman who is committed to making tough choices and keeping America great. I am thankful for her willingness to serve, and I look forward to working together to continue to deliver wins for Georgians. While Senator Isakson is an irreplaceable leader, Governor Kemp had a great pool of candidates to pick from – making it an incredibly difficult decision. Now it’s time for Georgia Republicans to come together so we can keep our state the number one place to do business and grow jobs.”

“I commend and support Governor Kemp’s appointment of Kelly Loeffler to replace Senator Johnny Isakson. Her experience as a businesswoman, conservative principles, and common sense approach will serve Georgia and our nation well in the U.S. Senate.”

“I know firsthand Governor Kemp’s commitment to doing the right thing for all Georgians in every decision, and I know he has had that in mind in making this important announcement. I’m proud to stand with him and our next U.S. Senator Kelly Loeffler. Like me, Kelly Loeffler is an outsider to politics with a passion to serve our state, defend our values, and fight on behalf of Georgians. Together, we will work side by side to keep Georgia safe and strong. I look forward to campaigning for her in 2020 and beside her in 2022.”

“I fully support Governor Kemp’s decision to appoint Kelly Loeffler as our next U.S. Senator. It’s rare that someone of her diverse background and real-world experience offers themselves for public service. She’ll bring much-needed common sense to D.C.”

“Though I do not know Ms. Kelly Loeffler, I do have the pleasure of knowing Governor Brian Kemp. I have found our Governor to be an individual of integrity and truth. He has shown himself to be very thoughtful and purposeful in his decision making and a conservative of conviction. He signed the Fetal Heartbeat bill. He has given me unwavering support to lead the Georgia Department of Education. Governor Kemp has stated that he would not nominate an individual to the U.S. Senate who was not pro-life, pro-Second Amendment, and a true conservative. He has earned my respect and trust. Thus, I support his selection of Kelly Loeffler as the next U.S. Senator for the great state of Georgia.”

“Governor Kemp has chosen the person he believes most qualified to represent our values in Washington. I congratulate Ms. Loeffler, and I look forward to getting to know her as we all work together to Keep America Great.”

“I am excited that Governor Kemp has appointed Kelly Loeffler to fill Senator Isakson’s seat. Her extensive business experience and conservative principles will serve Georgia well in the U.S. Senate. I look forward to working with her in the future to advance conservative policies.”