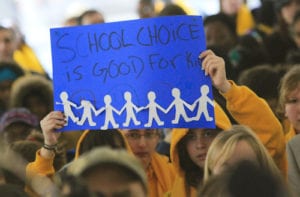 An amendment to Georgia’s constitution that would have empowered the state to take over so-called “failing” schools was rejected by a wide margin on election night. Unofficial results show that 60 percent of voters statewide voted down the measure with 64 percent saying no in DeKalb County.

DeKalb, one of the state’s largest districts, was cited as having 28 failing schools on the governor’s list—more than any school system in Georgia. Failing schools were defined by the governor as those that have scored below 60 on the state’s College and Career Performance Index for three consecutive years. CCRPI scores are based in part on students’ scores on Milestones and End of Course tests.

If the measure had been approved, schools deemed as failing would have been placed in an “opportunity school district” and converted into charter schools or closed. The OSD schools would be managed by the state.

Opponents have said the state needs to put more resources into public schools rather than taking funding away and giving that funding to governor appointees.