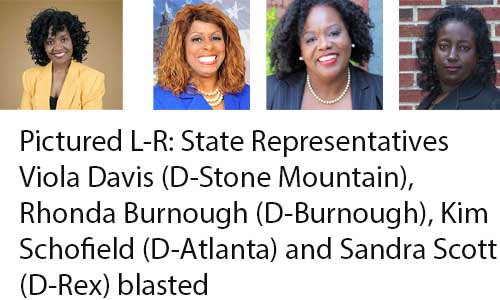 ATLANTA –A group of Georgia legislators are speaking out about reports of U.S. border patrol agents allegedly using horse whips and cages to round up Haitian migrants at the U.S.-Mexico border.

Thousands of Haitians and other migrants have converged on the border of Del Rio, Texas and other communities in hopes of crossing into the U.S. to seek asylum. Many of them trudging in the heat carrying  supplies and children.

“Border patrol agents on horseback using horse reins as whips and/or children being placed in cages are acts that must be condemned,” said Rep. Davis. “We must stand on a moral ground to demonstrate a level of decency, empathy and respect for migrants, immigrants, refugees and others seeking help. As a veteran and state representative, I must voice my disgust in viewing such behavior and demand a change in policy and training, especially when dealing with human beings. I live in an area in DeKalb County that is close to Clarkston and has a large population of immigrants and refugees. To watch these videos on television of the treatment of Haitian migrants was shocking and unbelievable. What century are we living in to tolerate such behavior? This is not ‘Django Unchained.’ We must make every effort to ensure that bad, deplorable behaviors are not systemic and engrained in the policy, training and execution of law enforcement. There is a job to be done. However, there is no excuse for behavior that dehumanizes people.”

“There is no excuse for the mistreatment of the Haitian refugees by border patrol agents in Texas,” said Rep. Burnough. “These individuals are victims of storms, violence and deplorable living conditions. They did not want to leave their country. They came here because America offers hope for a better life. What kind of individuals would mistreat people at their lowest point?”

“The media is calling the images ‘horrific,’” said Rep. Scott. “No, this is human rights abuse at its best. These acts are cruel, evil, hateful and inhumane. Having no regard for human life is surely a violation of law. These refugees should be treated and welcomed like the thousands of Afghanis were welcomed a week ago. I am calling on the U.S. Congress to take actions immediately to correct these brutal and inhumane acts at the border. These border patrol agents must be held accountable for their actions. They beat us, shoot us in the back and are now running us down on horses with a whip. This must stop. Congress must act now.”

“There is an intentional devaluing of human lives and the return to oppressive control that was evidenced by the use of horse reins to threaten Haitian migrants,” said Rep. Schofield. “The image of fleeing Black men and children chased by white officers on horseback echoes the historical injustices suffered by Black people in the United States. This is disgusting. I am beyond outraged. We need swift action and justice to be taken. No excuses. No delays. Where are the humanitarian needs for human beings?”