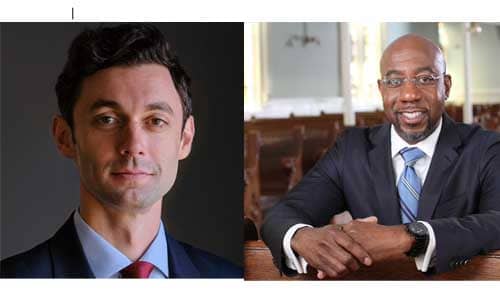 ATLANTA — Everytown for Gun Safety and its grassroots networks, Moms Demand Action and Students Demand Action, announced their support for Jon Ossoff and Raphael Warnock in the run-off elections for the U.S. Senate in Georgia, which will take place on Jan. 5, 2021.

Everytown for Gun Safety Action Fund endorsed Ossoff and Warnock ahead of the Nov.3 election.

“Everytown is proud to reaffirm our support for Jon Ossoff and Reverend Raphael Warnock, who are running against two gun extremists, one of whom proudly called herself more conservative than Attila the Hun,” said John Feinblatt, president of Everytown for Gun Safety. “David Perdue and Kelly Loeffler have both declared fealty to the gun lobby and opposed bipartisan gun safety measures like background checks on all gun sales. Everytown’s grassroots army is ready to do the work to send David Perdue and Kelly Loeffler packing.”

“Senators Kelly Loeffler and David Perdue have shown that their allegiance is to President Trump and the corporate gun lobby instead of the Georgians they were elected to serve,” said Shannon Watts, founder of Moms Demand Action. “Reverend Raphael Warnock and Jon Ossoff will put Georgians first and fight for the safety of our families and communities. Our grassroots army of volunteers is ready to get to work to send them both to Washington.”

“Moms Demand Action volunteers are ready to do whatever it takes to elect Rev. Raphael Warnock and Jon Ossoff – champions for gun safety who will fight day-in, day out to keep our families safe,” said Adrienne Penake, a volunteer with the Georgia chapter of Moms Demand Action. “And we’re ready to send Kelly Loeffler and David Perdue packing because instead of working for Georgians, they’ve prioritized special interests like the gun lobby, pandered to extremists in their party, and catered to the views of right-wing conspiracy theorists.”