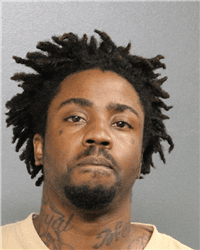 A Columbus, Georgia man suspected of shooting a woman on June 13 at a Flat Shoals Parkway Waffle House Restaurant in Decatur, Georgia, is in custody after being arrested by the DeKalb County Sheriff’s Office Fugitive Unit and the Columbus Police Fugitive Unit.

A warrant was issued on June13 for Anthony Henderson Perryman, 27, of Columbus, Georgia on a charge of felony murder in the death of Tanya Dunlap. The warrant alleges that Perryman shot Dunlap in the head, threatened witnesses who observed the incident, and fled the scene. Investigators were able to locate and arrest Mr. Perryman at a residence near Columbus and transport him to the Muscogee County Jail without incident.

Perryman will be brought back to DeKalb County to face the murder charge.