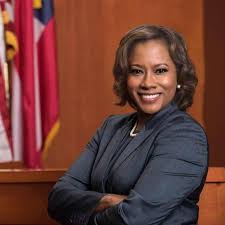 DECATUR, GA–DeKalb County District Attorney Sherry Boston announced a conviction by guilty plea in the nearly 2 1/2-year-old vehicular homicide case against Reginald Stubbs, 55.
During court proceedings today(July 9), Stubbs pleaded guilty as indicted to charges of Vehicular Homicide in the First Degree (three counts), DUI Less Safe, DUI Per Se, Reckless Driving, and Following Too Closely, in connection with the deadly crash that claimed the life of 18-year-old Kennedy Segars, who was home from college to celebrate her mother’s birthday that day.
The fatal incident happened on Oct. 13, 2018 in the 2900 block of Klondike Road in Lithonia. Segars was stopped at a traffic light in her Honda Civic behind three other stationary vehicles when Stubbs slammed into the rear of the victim’s vehicle in a Mercedes Benz at a speed of 46 miles per hour. There was no indication the Defendant ever attempted to stop.
The force of the impact lifted the rear of the victim’s car and propelled it forward into the car in front of her, which, in turn, caused a chain reaction wreck with the two other vehicles stopped at the light. The victim and defendant’s vehicles eventually dislodged and spun into an embankment in front of a residence.
Kennedy Segars sustained a traumatic brain injury and passed away two days later.
Stubbs admitted to investigators that he had consumed multiple drinks earlier that day in combination with a pain medication he was taking. His Blood Alcohol Content (BAC) was .196, two times the legal limit.
Following his guilty plea, Stubbs was sentenced by DeKalb County Superior Court Judge Mark Anthony Scott to a maximum of 16 years in prison, as recommended by the State.
The case was prosecuted by Senior Assistant District Attorney Charles C. Ciba. with assistance from DA Investigator Tom Rumble, and Victim Advocate Sandra Trejos. Detective L.W. Armstrong of the DeKalb County Police Department led the initial investigation.
Post Views: 1,775
Share. Facebook Twitter Pinterest LinkedIn Tumblr Email
On Common Ground News