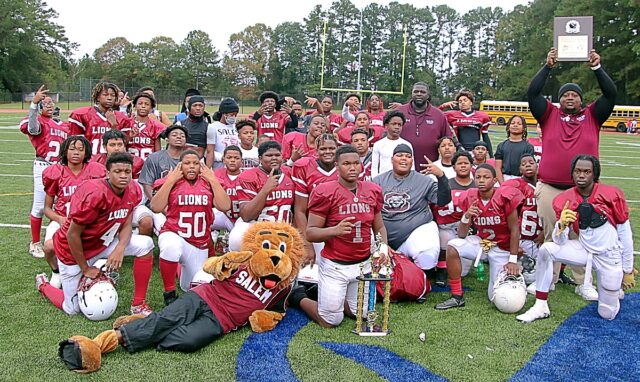 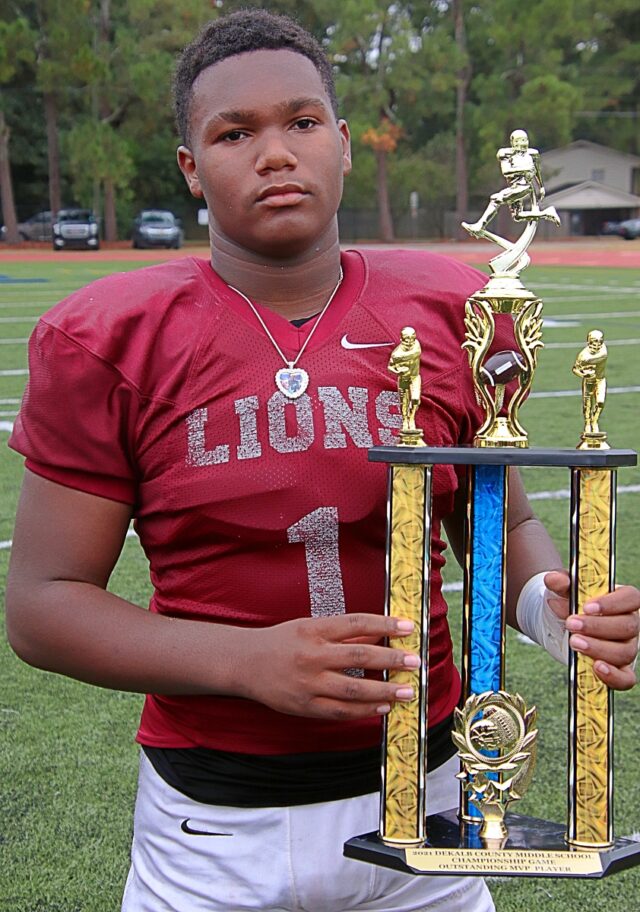 The Salem Middle School Lions are celebrating their victory as DeKalb County’s 2021 Middle School Football Champions. The Lions went down to the last play to hold off the Stephenson Jaguars 6-0 and win the  championship on Nov. 6 at Avondale Stadium.

Salem’s CJ Harris stripped a Stephenson ball carrier of the football at the Salem 17 and returned it 22 yards to the Salem 39 with just 1:28 to play and the Lions were set to run out the game clock.

Stephenson used its timeouts and on fourth down tackled a Salem back at the Lions’ 25 with 14 seconds to play to get an opportunity to tie or win the game in the final seconds.

After three incomplete passes, the game clock was at 1.2 seconds giving the Jagaurs one final chance. Quarterback De’Rick Pittman lofted a pass down the left sideline towards Cavalli Jackson only to have a Salem defender break up the pass inside the three-yard line to preserve the victory.

Heading into the fourth quarter Salem was driving at the Stephenson 41 and facing a third and 10 with the game still tied at 0. Xavier Butler ripped off a 12-yard run to pick up the first down at the 29.

Harris took it from that point with a 19-yard run to the 10 breaking several tackles along the way. He then went the final 10 yards pushing defenders with him into the end zone for the go-ahead score with 7:18 to play in the game. The two-point try was no good and Salem led 6-0.

Stephenson, behind the hard running of Jackson, who carried three times for 29 yards, as the Jaguars marched to the Salem 18. Jackson then got outside on the left side and into the end zone for what looked like the tying touchdown only to have it nullified by a holding call.

Facing a fourth and 10 at the 18 Pittman was pressured and sacked by Leonardo Mejia to give Salem the football at the 27. Three plays later Stephenson got another chance with 2:30 to play when Harris made his second fumble caused.

The two teams had battled to a 0-0 tie with under two minutes to play in the first half when Stephenson’s Jayden Johnson broke away around the right side and was racing down the field on what looked a like an apparent go ahead score. Salem’s Harris never gave up on the play and caught Johnson at the one stripping the football before he crossed the goal line. The Lions recovered for a touchback with 2:39 left in the first half.

Salem was able to run out the first half for a 0-0 tie after Harris in punt formation took off to his left for a 20-yard gain to keep the clock running.

Salem finished the season undefeated at 9-0 and unscored upon. The Lions became just the seventh program to complete and undefeated championship season joining Stephenson (4), Miller Grove (2), Cedar Grove (2), Tucker (2), Avondale (1) and Champion (1). Salem is the ninth program to claim a title.

The Lions outscored their opponents 215-0 (23.9 ppg/0.0 ppg) to become the first team to finish without allowing a touchdown on the way to the championship.

Stephenson fell to 6-2 with the loss. Stephenson is now 5-2 in seven championship appearances. The championship game was a rematch of the first title game back in the 2004 season which Stephenson won on the way to back-to-back titles. 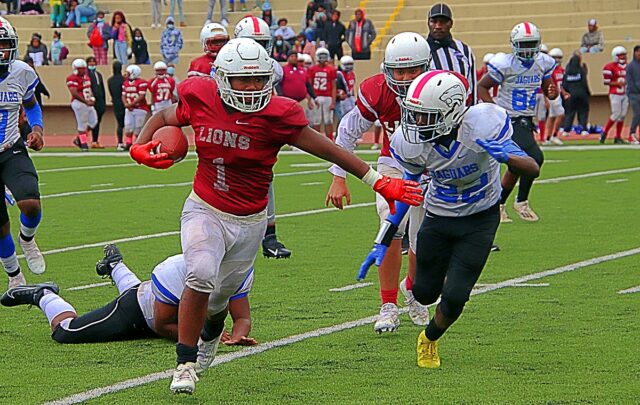