DEKALB COUNTY, GA– Inmates at the DeKalb County Jail apparently planned to celebrate this past Halloween weekend. Alas, those plans were foiled when a “contraband drop” of items they ordered was interrupted by the arrest of the deliveryman.

David Askew, 59, was taken into custody by the DeKalb County Sheriff’s Office on Oct. 30 while he was still on the premises of the DeKalb County Jail on Memorial Drive after he allegedly sent contraband up the outside walls of the facility and into an inmate’s cell using a fishing line and a plastic bag. 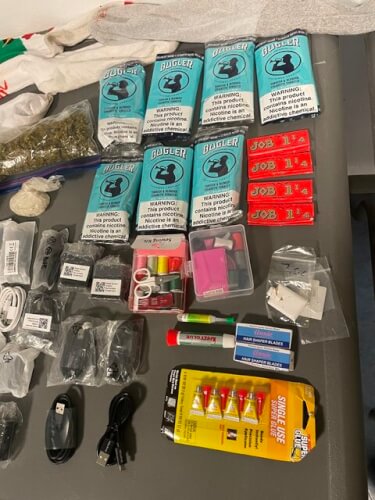 “This was a sizable drop,” observed Chief Deputy Randy Akies, “And one with quite a bit of variety.”

According to the arrest warrants, Askew, a College Park, Georgia resident, is charged with Crossing State/County Guard Lines with Weapons, Intoxicant Drugs without Consent (a felony) and Criminal Trespass-Unlawful Purposes (A Misdemeanor). He is being held