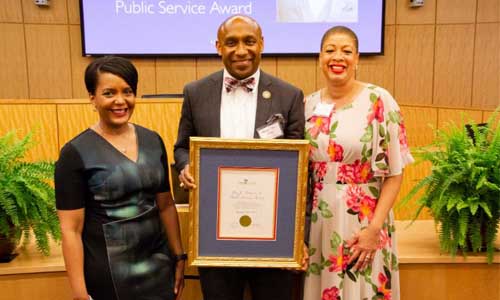 The award is presented each year to a Georgia attorney whose overall accomplishments reflect the high tradition of  founding dean, Ben F. Johnson, Jr.,

Wendy F. Hensel, Dean of Georgia State College of Law, applauded Davis for his service to the community.

“Many of us talk about the need to fight injustice, to be better people ourselves, and to help other people lead productive lives. Mawuli, however, is someone who lives that ethic every day in everything he does, ” Hensel said.

Atlanta Mayor Keisha Lance Bottoms, who attended the awards program, said Davis has a “contagious passion for people who don’t often  have avoice in our community.”