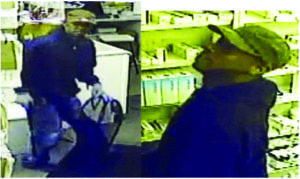 Conyers Police along with Crime Stoppers Greater Atlanta are offering up to $5,000 for information leading to the arrests in two cases they are working.

Police are seeking information about the Beasley Drug store  burglar. The suspect burglarized the downtown Conyers pharmacy on June 2 and June 5, stealing pharmaceuticals in mesh a laundry basket. The first time, the suspect broke in by smashing the store’s front door with a crowbar and the second time, by using a chunk of concrete.

Conyers Police also are asking for the public’s help in identifying two suspects who burglarized the Best Buy in Conyers on June 17 at 3:50 a.m. The suspects broke through a receiving garage door and stole drones and gaming consoles.  The same location was burglarized on May 9 in a similar manner.

See video of both incidents: https://youtu.be/RztLtn33nAI

Any information leading to the arrest of the suspects may result in a cash reward of up to $5,000.

Tipsters will remain anonymous and are asked to contact Crime Stoppers with any information: 404.577.TIPS (8477);Text: CSA + your tip to CRIMES (274637) or click: www.CrimeStoppersAtlanta.org.