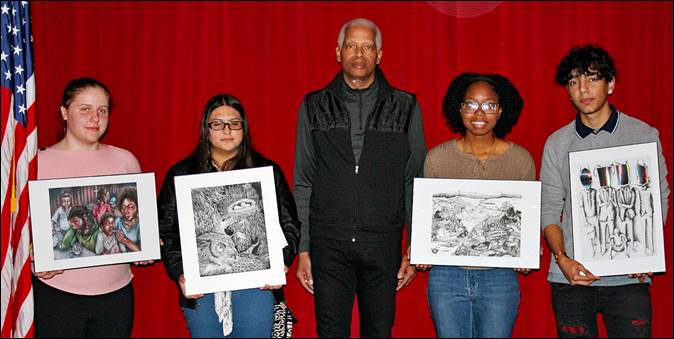 Congressman Hank Johnson (GA-04) announced the winners of his 2020 Congressional Arts Competition and awarded four college scholarships worth a total of $35,000 on March 7 at the Art Station in Stone Mountain.

In this year’s competition, there were 40 entries from eight high schools throughout the Fourth District.

The Grand Prize Winner was Sarah Adams, a senior at South Gwinnett High School. She won a $12,000 scholarship to The Savannah College of Art & Design (SCAD) for her work “Nourish.” Adams will travel to Washington, D.C., in June to see her art displayed in the Capitol, where it will hang with other award winners from around the country for a year. Adams also won two roundtrip airline tickets from Southwest Airlines to Washington, D.C., for the National Recognition Ceremony.

First runner up was David Moreno, a senior from South Gwinnett High School. He won a $12,000 scholarship to The Art Institute of Atlanta for his work “Immigrant.” His work will be displayed in Congressman Johnson’s District office for a year.

Second runner-up went to Mena Perry, also a senior at South Gwinnett High School, for her work “Trash.” She earned a $7,500 scholarship to The Art Institute of Atlanta.

Third runner-up was Xenia Delgado, a sophomore at Miller Grove High School in DeKalb. She earned a $3,500 scholarship to The Art Institute of Atlanta for her work “Owl.”

Since 2007, Johnson has awarded more than $500,000 in arts scholarships to Fourth District students.