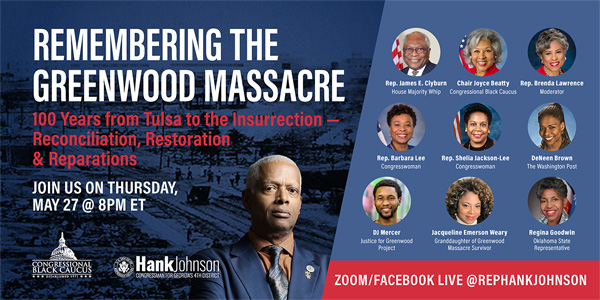 On Thursday, May 27, at 8 p.m. ET, Congressman Hank Johnson (GA-04) is hosting a Congressional Black Caucus event to commemorate the 100th anniversary of the Tulsa Massacre — when a mob of white residents set fire to “Black Wall Street” on May 31 and June 1, 1921. Hundreds of Black-owned businesses and homes in the Greenwood district of Tulsa, Oklahoma, were destroyed and an estimated 300 Black residents were murdered. More than 10,000 Black residents left homeless.

“Remembering the Greenwood Massacre: 100 Years from Tulsa to the Insurrection — Reconciliation, Restoration & Reparations” will be a Zoom to Facebook virtual discussion featuring members of the Congressional Black Caucus, a PBS documentary filmmaker, descendants of survivors and the Oklahoma state representative who represent Greenwood today.

Members of the CBC:

WHAT: Virtual Event: “Remembering the Greenwood Massacre: 100 Years from Tulsa to the Insurrection — Reconciliation, Restoration & Reparations”

Participants can view the event on Zoom. Register HERE: https://ushr.zoomgov.com/webinar/register/WN_DJlpPxR5TjO9RKpYr-AJoA

The event  also will be streamed live on CBC members’ Facebook pages and the CBC Facebook page — @CongressionalBlackCaucus.