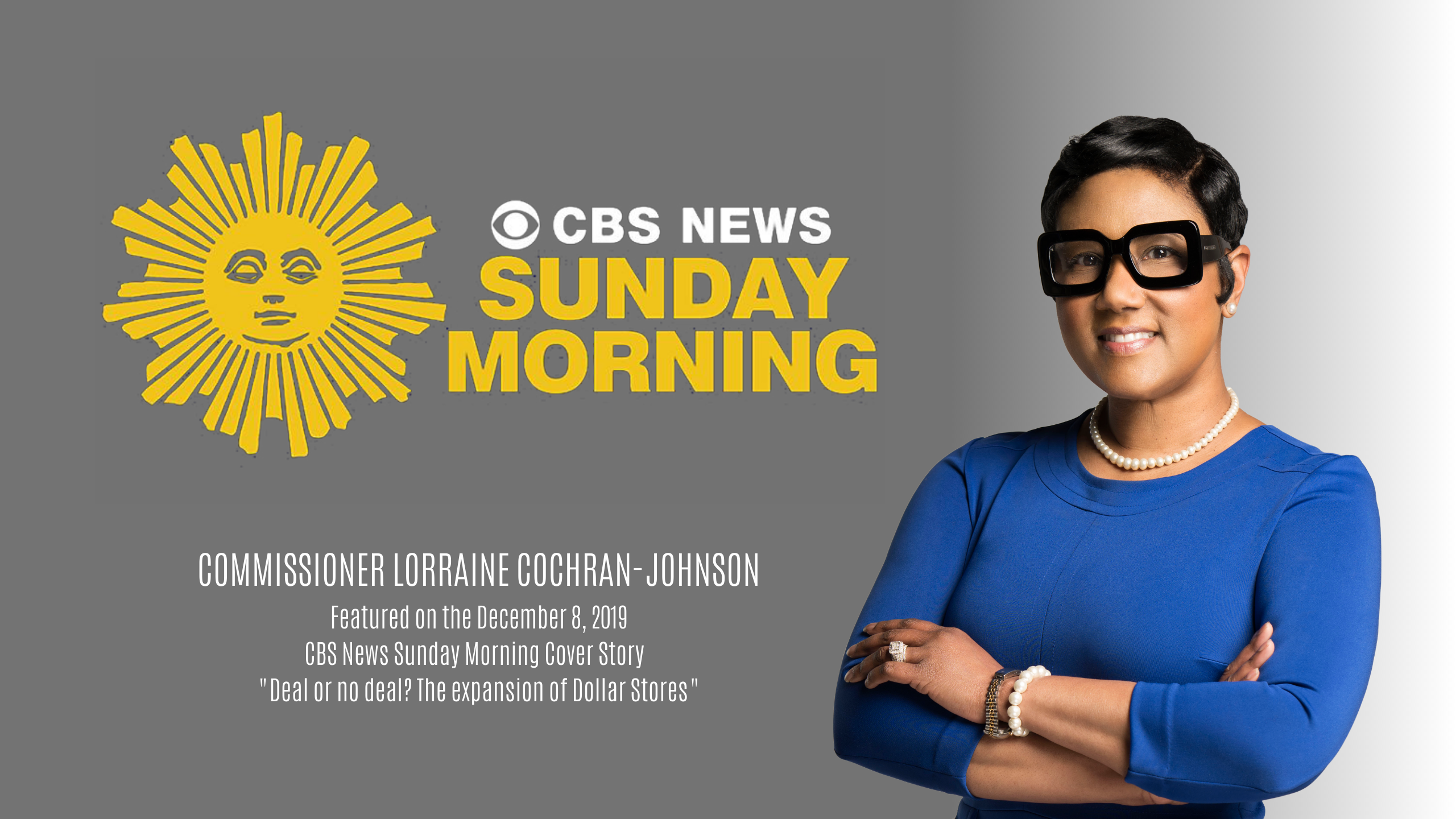 DeKalb County Commissioner Lorraine Cochran-Johnson is speaking out about the growing prevalence of dollar stores and the negative impact they are having on communities from a health standpoint and on local grocers locally and nationally.

Cochran-Johnson joined a national conversation on the subject during the Dec. 8 CBS “Sunday Morning” interview with Special Contributor Allison Aubrey.

DeKalb County and Moville, Iowa were featured in the segment, along with business owners and case studies from across the United States.

The issue is one that prompted DeKalb’s Board of Commissioners (BOC) to approve a 45-day moratorium on dollar stores this week.

The DeKalb BOC is not alone. In November, the City of Stonecrest approved a ban on future small-box stores offering items that costs less than $5 after residents complained about the prevalence of the stores, and expressed a desire for better quality retail, restaurants and grocery stores.

In neighboring Rockdale County, BOC ChairmanOz Nesbitt announced the temporary shutdown in October of the Family Dollar store at 2460 Salem Road, Conyers after the store failed to address repeated violations cited by the county’s code enforcement officers, fire marshal and community improvement team. Trash and debris were strewn on the premises and boxes and merchandise were piled so high inside that workers and customers would be unable to get out in the event of an emergency, Nesbitt said. Rockdale has a zero tolerance for eyesores, Nesbitt said.

During the CBSreport, commentators said people in communities most impacted by dollar stores often find themselves driving 30 minutes for fresh produce after local grocers closed their doors in the wake of the growing number of dollar stores.

Barry Popkin, professor of nutrition at the University of North Carolina Chapel Hill, said dollar stores are killing America and warned consumers to stay away from the sugar, soda, and processed food high in fat and salt typically sold in dollar stores.

“[Dollar stores] increase the risk of heart disease, mortality, cancer mortality, diabetes, obesity– this is the worse food that can bought,” said Popkin. “It’s adding to the health crisis that lower-income America faces – and that’s black, Hispanic, and white America.”

Commissioner Cochran-Johnson said that 25 percent of DeKalb’s population lives in a “food desert”—areas with limited access to supermarkets.

“Dollar stores tend to highly saturate areas,” Cochran-Johnson said during the CBS segment. “When you look at the pattern of growth of the Dollar Store, as well as the areas that have the highest levels of obesity, hypertension, and high blood pressure, there is a direct correlation between their presence and poor health. We see it in the data.”

“With 68 percent of all dollar stores located in my District, I have an obligation to take every action possible to ensure these stores do not adversely impact our community,” said Cochran-Johnson. “I have no problem with dollar stores in my District. I am against their proliferation of underserved communities and I feel the need to educate people on the consequences of their presence. Dollar stores have a huge impact on healthy communities and economic development. As a Commissioner, their over saturation creates a challenge for me in many ways.”

“I have studied dollar store legislation passed in cities across the U.S.,” said Cochran-Johnson, “I am proud to be a part of a national conversation on how to limit the growth of dollar stores. I am grateful to CBSand the team at the Institute for Local Self Reliance and their commitment to ensuring healthy communities across the United States.”

For more information on dollar stores or to view the segment from CBS Sunday Morningvisit the “News” tab at: www.CommissionerLorraineCochranJohnson.com.