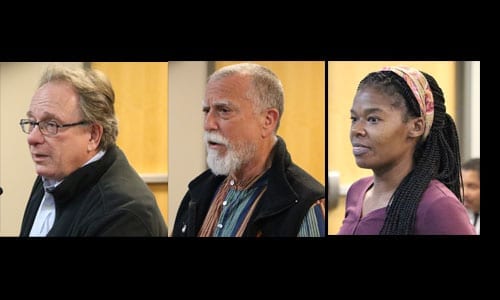 The Stonecrest City Council tonight (Jan. 27) deferred a decision on a request for a rezoning and special land use permit for a gas station/assisted living facility at 3320-3300 Turner Hill Road.

The council approved a 12-month deferral after city staff advised that one of the applicants was unable to attend tonight’s public hearing because his wife died after injuries from a volcano eruption that occurred while the couple was recently vacationing in New Zealand.

Three people spoke against the project, while none spoke in favor of it during the public hearing portion of the City Council meeting.

Attorney Bernard Knight, who represents the interests of several businesses and landowners in the city of Stonecrest, was the first to speak in opposition.

“The applicant was consistently told by both the residential and business communities that the objectionable portion of this project was the gas station/convenience store in its location, that the nursing home/assisted living aspect of it was probably going to be O.K.,” said Knight. “…The public’s interest would be better served if the applicant went back to the drawing board and had a community meeting to evaluate whether they want it.”

Citizen Dave Marcus said there were two many questions and concerns that were not addressed by the developer in community and planning meetings.

“They had not done any kind of economic development use study. They didn’t know what the traffic was going to be. They didn’t know there was another one(gas station) proposed virtually for next door. They couldn’t state whether the assisted living facility would be one story or two story,” said Marcus. “They couldn’t really say if it would be an assisted living facility or a nursing home… This is not a developer who has done much in planning… This is a developer who wants to put a gas station on Turner Hill Road. This is a developer who wants to take R-1 and turn into commercial.”

Nichelle Stephens-Smith, another citizen, also objected to the proposal, saying the applicant could not give a “clear definition of what they were trying to build.”

“Their timeline was non-existent. Their first priority was the gas station. When asked if they did a market feasibility, they had not done one nor did they plan to do one,” Stephen-Smith said.

Councilman Jimmy Clanton, District 1, made the motion to defer a decision on the project for 12 months to give the applicants the opportunity to determine if they still wanted to proceed and to work on the proposal.