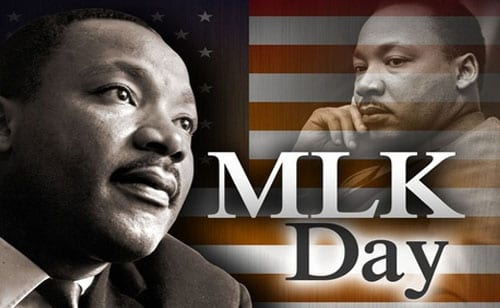 The King Day charge will be delivered by Juanita Baranco, executive vice president and chief operating officer of the Baranco Automotive Group.

The 2019 tribute marks the 51st anniversary of King’s death and the 35th consecutive year DeKalb will host the employee-planned event honoring the life and legacy of Dr. King.

Shelley “Butch” Anthony III, owner of This Is It BBQ & Seafood, and Charles Greene, owner of Matthews Cafeteria, will be honored with the Nathaniel Mosby Humanitarian Award which celebrates the recipients’ commitment to tireless community service and outstanding dedication to being an agent for positive change.

The celebration is free and open to the public. For more information, visit www.dekalbcountyga.gov.

This year’s celebration also will honor Vietnam veterans and highlight DeKalb County’s sanitation workers. King was in Memphis, Tennessee advocating for black sanitation workers’ rights when he was shot and killed there in 1968.

Several bands from the DeKalb County School District will participate in the parade. Opening ceremonies will begin at 11:30 a.m. at Green Pastures Christian Church, 5455 Flat Shoals Parkway, Decatur. The parade will follow at noon.

Daughters of the late Sara Copelin-Wood, who served as a DeKalb School Board member and county NAACP executive board member, will serve as grand marshals.

In celebration of the King Holiday, volunteers will come together to restore the homes of Decatur seniors. Since 2003, the Decatur Martin Luther King Jr. Service Project has provided free home maintenance and yard work. In 2017, the project helped 33 senior households with 1,200 volunteers.

There will be a program and awards ceremony in the Rockdale County Auditorium following the parade.

Individuals and groups interested in being in the parade or the program may contact Josie Dean by email at rockdalecountythinktank@gmail.com or via telephone at 770-369-1507.

The Conyers-Rockdale Chamber of Commerce and the Rockdale Branch of the NAACP will co-host their breakfast in honor of the King Holiday on Monday, Jan. 21, 7:45 a.m., at Rockdale Career Academy, 1064 Culpepper Drive S.W., Conyers. For years, the breakfast was held at Longhorn steahouse.

The cost to attend the breakfast program is $12 for adults and $5 for children under 12. Tickets are first-come, first-served. There are no advanced tickets and seating is limited. For more information, visit conyers-rockdale.com or call 770-483-7049.

.Dancers from Jenae’s Dance Experience and Showtime Pros, as well as local talent from Rockdale County Public Schools will perform in a show highlighting Dr. King’s legacy and his impact on civil rights, past and present, with the theme being “This is America”. Congressman Hank Johnson will be the special guest at the event. Admission is free and the public is encouraged to attend.