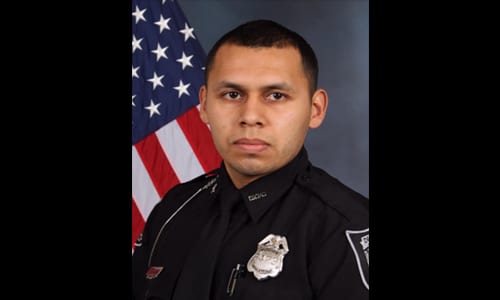 DeKalb County District 3 Commissioner Larry Johnson and the South DeKalb Police Precinct are inviting the community to the Officer and Community Appreciation Awards, which will be held this year in memory of DeKalb County Police Officer Edgar Isidro Flores.

The awards program, which is open to the public, will be held on Jan. 9, 12 noon to 1:30 p.m., at the South Precinct 2842 H.F. Shepherd Drive, Decatur. The balloon release in memory of Flores will follow the awards program.

Flores died in the line of duty in December after he was shot during a routine traffic stop on Candler Road in South DeKalb. Flores, who was 24 years old, had served with the DeKalb County Police Department for just 18 months.

The man who shot Flores also was killed during the incident after officers arrived on the scene and tracked the suspect with K-9 Indi. The police dog was critically injured but pulled through surgery from his injuries and attended the officer’s funeral at All Saints Catholic Church in Dunwoody, where Flores was remembered with emotional tributes.