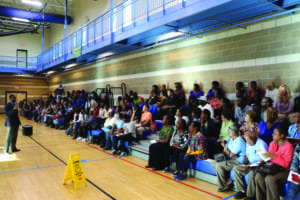 DeKalb County won’t be operating its summer program this year at the Redan Recreation Center, 1839 Phillips Road, Lithonia. Instead, the Boys & Girls Club will run the summer program for children. County officials held an emergency meeting on May 16 to discuss the program with community residents after DeKalb Commissioner Mereda Davis Johnson said she received several questions from constituents. Johnson said she held the meeting so residents could get clarity. DeKalb Interim CEO Lee May, who spoke at the meeting at Johnson’s request, told the crowd of residents who attended that the county is expanding a pilot agreement with the Boys & Girls Club, which had run an after-school program at the recreation center during the school year. The Boys & Girls Club pays no lease for running the pilot program at the center, May said. “We just felt that the Boys & Girls Club could provide more programming and educational classes. Over the years, the county has faced cutbacks in our budget for recreation and this was a way to address those issues,” May said. One of the chief concerns expressed at the meeting was the payment required up front by the Boys & Girls Club. The club requires that its $415 fee be paid ahead of the nine-week program, while the county typically allows weekly payments and permits parents to pay for only the weeks they use. Parents also were concerned about a discrepancy in pay for some parents. Parents whose children were already members of the Boys and Girls Club will have an advantage over those who are not members. Boys and Girls Club members will only have to pay $150 for the summer program, although members must also meet other attendance eligibility requirements. “I know for a lot of parents, paying the money up front may pose a hardship. It’s something we’re trying to work through,” said May. Johnson encouraged parents to contact her office for questions and concerns. Her office can be reached at 404-289-2244 The Boys & Girls Club offers some scholarships and wants to work with families and serve the community, representatives who were on hand said. The club plans to serve as many children as possible, they said.